On this day 11 June 2010 as the world and especially Africa were joyfully watching the opening ceremony of the first ever world cup on the soil of Africa, we learned that the former South African President Nelson Mandela who was thought to be going to attend the opening ceremony has pulled out after the death of his great-grand-daughter who was killed in a car crash earlier in the day.


As we remember Zenani Mandela who celebrated her 13th birthday four days before her tragic death let’s remember her grandfather in our prayers, President Mandela, 94-year-old who spent his fourth night receiving intensive care for a lung infection. 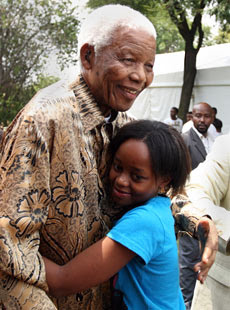 Mandela withgreat-grand-daughter   Zenani, 13,
who was killed in a car crash. Photograph: Ho/Reuters
Posted by Crystal Horizons at 01:39