Today I share with you an inspiring story of the first Rwandan female pilot by Marc Hoeferlin and Lauren Said-Moorhouse, 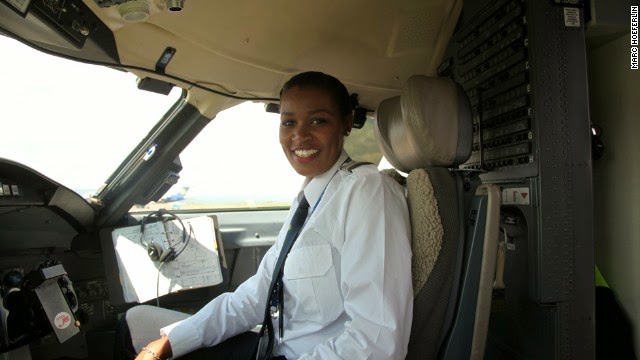 Esther Mbabazi wheels her bag towards the airstairs of the Boeing 737 sitting quietly on the tarmac at Kigali International Airport. Today she'll be flying from Rwanda's capital city to Juba in South Sudan.

A short hop south with a flying time of around 1 hour and 20 minutes. But for Mbabazi, 26, it isn't about the destination. As Rwanda's first female pilot, it's about the journey and her highest priority is to get passengers safely to their terminus.
"Growing up I wanted to be a pilot when I was four," says Mbabazi, who became a pilot for Rwanda's national airline carrier, RwandAir, at 24. "I'd never been inside a cockpit but I used to see a plane in the sky and I imagined that thing must be flown by someone.


"I had to go for it. Even though it looked like a long shot, it was my only shot -- that's how I saw it so I went for it, and here I am."
Dream big
During her childhood, Esther's family would move on a regular basis due to her father's work as a pastor. But her desire to take to the skies never wavered, even after her father passed away in a plane crash in the Democratic Republic of Congo, when the passenger aircraft he was traveling on overshot the runway and hit some terrain.
"From day one, he was always my biggest supporter or fan," recalls Mbabazi, who lost her father before turning 10."[But] an accident is an accident. Like I said, if someone gets hit by a car, you don't stop driving.
"You can't live life being scared an in fear of anything. If something is bound to happen, you can't stop it."
Going all in
Thus, Mbabazi continued to work toward her goal of becoming a pilot and achieving what no other woman in her country had done before.
Once she completed high school, she packed her things and bought a one-way ticket to attend pilot school in Uganda.
"When I went it was a one-way decision," she says. "If they bounce me, I'll just pack my things and come back -- so that was the way I joined pilot school, and it was a long journey."
"Time has changed. Women are out there working, technology has changed, and everyone has the brains to do something.
Esther Mbabazi, Rwanda's first female pilot
A year later, Mbabazi began training with Rwandair in Miami and her exploration of the aviation world began.
"My greatest memories are flying to different cities," she says. "Being in the sky gives you a whole other view -- you get to see what they call a bird's eye view of everything."
Sexism in the skies?
Now, the young pilot has become a pioneer in a male-dominated industry in Rwanda, and yet she knows she is constantly being closely watched because of her gender.
"No one ever says, 'Oh it's a male crew aircraft that crashed,' even though it's been many of the sort," she says. "But you know, if there's a woman on board and something happens, you know, definitely you're going to be mentioned."
Mbabazi recalls a previous incident where a passenger realized that the pilot for his flight was a woman shortly after arriving at the gate and refused to get on the flight.
"The cabin crew said we'll gladly leave you behind. You've already paid the ticket, so if your reason is that basic and shallow, it's not because of safety reasons. It's just because you don't want to fly with a woman, we'll gladly leave you behind."
Mbabazi refuses to let her critics win and is determined to continue being a role model for others. She hopes that her achievements can provide inspiration to other women who might not think they can attain their dreams jobs.
"Time has changed," she says. "Women are out there working, technology has changed, and everyone has the brains to do something, now it's not about how much bicep or how much energy you have."
From African Voices  which is a CNN's weekly show that highlights Africa's most engaging personalities, exploring the lives and passions of people who rarely open themselves up to the camera.
Posted by Crystal Horizons at 00:45